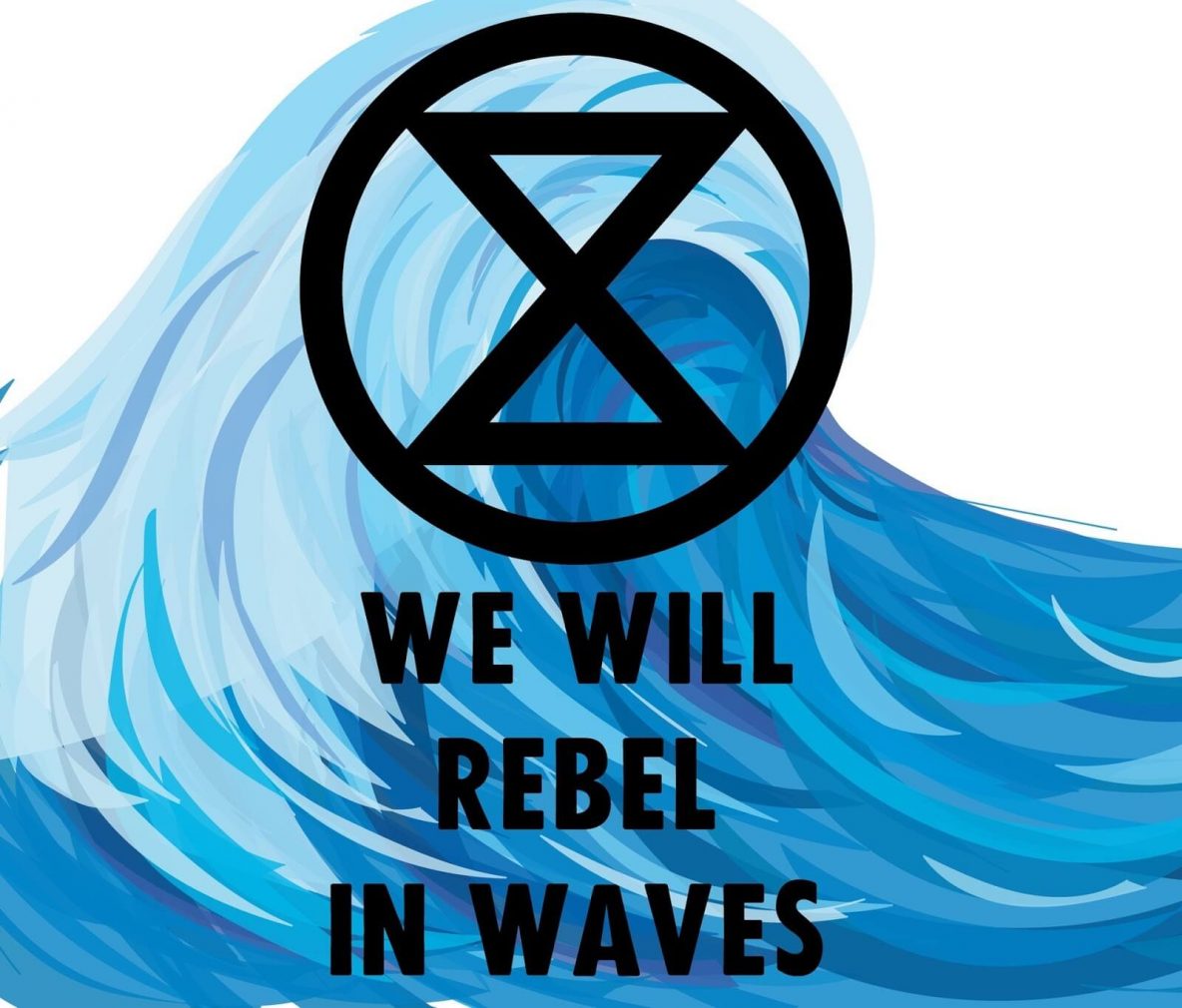 Whether you swoon for Valentine’s Day or think it represents everything that’s wrong with the world, we hope you’ll accept this newsletter as a message of affection from us to you; putting the ‘love’ into ‘Love and Rage’.

Today, we are proud to announce that we will rise up in Waves of Rebellion across the world!

At an exciting international meeting, rebels decided that countries will organise their own ‘wave’ in period of Rebellion that will cascade from April to June. With over a dozen countries already signed up and choosing their dates, Extinction Rebellion is set to send ripples right round the world! See Upcoming Activity for more info.

In this issue, we zoom to The Netherlands, where 35 rebels were brutally arrested while protesting at Shell’s Headquarters; and to sunny Hollywood, where XR Youth LA join forces with Indigenous leaders to protest the total lack of climate awareness in the movie industry. In Munich, rebels teamed up with Indigenous speakers to crash Siemens’ shareholder conference and protest its relentless funding of ecocidal activities.

Meanwhile, Australian rebels were giving the media corporations a taste of their own medicine with some excellent and creative actions.

XR UK released their 2020 Strategy, crystallising some key themes for the year ahead, in advance of XR UK’s first big action of the year, ‘Together We March‘ on 22Feb.

We have a guide from XR Muslims on how to engage with Muslim communities. And, finally, in Humans of XR, we hear from an ex-probation officer who has been breaking the law for the good of the planet. This Rebellion needs your support. If you can’t give time, consider giving once or becoming a regular donor.

Police Brutality and Mass-arrests in Amsterdam A brave group of rebels from XR Nederlands glued on to the entrance to Shell’s World Headquarters and splashed ‘oil’ on the front steps, as part of a coalition of activists called Shell Must Fall.

The peaceful protest was met with unreasonable force when police stepped in and dealt blows with their batons, dragging the rebels from the site and arresting 35 of them.
In one video, a police officer can be seen holding his hand over a rebel’s mouth while the man struggles to breathe. Some rebels were held well beyond the 9-hour legal limit, with the last rebel released after 48 hours. Shell claims its business strategy is in alignment with the Paris agreement. However, Documents from the 1980s and a public information film produced by Shell in 1991 clearly show that the company has long been aware of the threat posed by the use of fossil fuels and that it plans to continue to extract oil and gas.
A clear example of a company putting short-term profit over the future of life and our planet.

No Hollywood on a Dead Planet Hollywood, listen up: GLOBAL INFLUENCE = GLOBAL DUTY (Photo: Dennis Noack/SpectralQ)
The day before the Academy Awards ceremony, XR Youth LA held a dramatic die-in under the iconic Hollywood sign.
An organiser explains their target:
“Hollywood is a global influencer, and what it does or doesn’t do sends a powerful message around the world. Hollywood has a moral duty to become Climate Emergency Storytellers.”
Horrified by the 15 million tons of CO2 that Hollywood produces every year, XR Youth LA demands annual eco-audits and net-zero CO2 by 2025. Indigenous Leaders in the Heart of the Change

As part of the die-in, the group invited Amazonian Indigenous Leader Sonia Guajajara to sit in the center of the human hourglass. The gesture, they said, ‘represents that Indigenous respect for nature holds the key to ending our Climate Emergency and ecological destruction.’
In addition to global consequences, XR Youth LA is sensitive to local concerns. ‘Environmental racism impacts many families in Los Angeles. Low income communities, often communities of color, are disproportionately forced to live right next to oil refineries and other fossil fuel infrastructure. ’

An Adani mine protest with an Australian twist The Wangan and Jagalingou First Nation People are on the front line in the fight against the Adani Carmichael mine in Australia. With the capacity to export 700,000 million tonnes of carbon dioxide every single year, this mega-mine would be an environmental disaster.
Siemens is the only company left that is willing to provide the signalling systems for the mining operation. Despite worldwide pressure, Siemens has refused to cancel the contract.
Australian activists travelled to Germany and were able to directly address shareholders at the Siemens AGM in Munich on the 5th February.
Murrawah Johnson, Varsha Yarman and Dr. Lindsay Simpson spoke about the Emergency and the impact of the Adani mine. Fellow rebels onstage translated their speeches into German. Seven rebels locked on with superglue at the Siemens AGM. (Photo: Helge Brügner)

Rebels showed up in force at the meeting – some staging a “die-in” at the entrance while seven other rebels locked-on inside the conference hall, and another rebel turned himself into a “security kangaroo” and hopped across the conference floor.
Annemarie Botzki from XR Deutschland commented : ‘We will fight for our future, Siemens prides itself on taking the lead in the fight against the climate catastrophe and speaks of climate neutrality for 2030, and in fact the company continues to participate in climate-destroying projects.’
Lukas Schnermann added : ‘We therefore demand from Siemens’ board members that they implement the contents of their PR methods and get out of all climate-damaging projects.’

29 JAN – 1 FEB | Brisbane & Sydney, Australia
On January 29, Australian rebels protested News Corp’s global campaign of climate denial and disinformation.
They dumped a truckload of manure in front of the Brisbane headquarters to ‘return some of the bullsh*t that News Corp has been giving us.’ Then they glued themselves to the office doors.
The group also posted a cheeky ad on Gumtree for the pile of free manure, saying ‘if it’s gone, there’s plenty more inside the building’! In Sydney: Protesting Lies With a “Lie-In”

On February 1, hundreds of rebels protested Murdoch’s climate lies with a ‘lie-in’ protest in front of the Sydney News Corp headquarters. Murdoch’s climate denial and disinformation isn’t just an Australian problem. It’s a global threat. While Murdoch’s media empire controls 60% of newspapers sold in Australia, it also controls 36% of newspapers sold in the UK, 50% of cable news viewership (Fox News), plus the Wall Street Journal, and the New York Post.
It’s little surprise then that climate denial is unusually strong in these countries. Every Murdoch outlet has for decades pushed the message that says climate change doesn’t exist or doesn’t matter.
Fortunately, we have a global network of truth-telling rebels who are committed to exposing lies, denial and corruption. Liars, watch out.

Guide to Engaging With Muslim Communities

XR Muslims has written a must-read guide for engaging with Muslim communities in the UK. The guide may spark ideas for rebels to engage with marginalized communities globally.

Alessandra Palange pointed out that her document specifically addresses Muslim communities in the UK.
‘We need to keep in mind that we are up against wealthy, powerful transnational corporations and that the climate emergency knows no borders. It’s important to nourish identities that connect us beyond a limited understanding of national citizenship,’ says Palange.

#Reach Out Beyond Your Bubble

Nearly 25% of the world’s people are Muslim. Building bridges with Muslim communities is vital, whether it’s coordinated or aligned actions. The only effective way to act on climate is to embrace our diversity and work together.
If you’re part of a group that has been pushed to the margins and if you have written a similar outreach guide, we want to hear from you! Please email the Newsletter team at [email protected]

More beautiful and courageous action from XR groups around the world. There is so much to tell. Johannesburg, South Africa. About 50 activists, led by XR, picketed outside the Gauteng Legislature, calling on the government to declare a climate emergency. Photo: Zoe Postman. Kandy, Sri Lanka. XR Youth had a plant donation day in front of the Tooth Relic Temple and donated 300 plants to people. 100% At the end of January, XR’s Global Support (GS) hosted a call attended by 50 rebels from all around the globe. It was the first call in the history of XR where countries met and decided together how to rebel.
We decided to create Waves of Global Rebellion during the same period (April – June) all over the world.
Many groups have already set their dates: Venice – FEB 20, Netherlands – APRIL 13, Switzerland – APRIL 16, USA, Mexico City – APRIL 20, Africa Climate Week – Uganda – APRIL 20-24, Italy – APRIL 24, Finland, Germany, France, Australia, Canada – MAY 4, Austria – MAY 11, Spain – MAY 18, UK, Argentina, Ireland, Italy – MAY 23, Norway – JUNE 2, Sweden – JUNE 6, Hong-Kong – JUNE 7, Brussels – JUNE 12. Other groups are joining and sharing the dates of new Waves.
This ‘Wave of Rebellion’ will build towards the strategy of mass disruption for COP26 in November.
If you want to join a project group or add the next wave to the calendar, please write to us at [email protected] or join us on Mattermost.

Together We March – 22nd FEB We will march on our capital city, wearing our hearts on our sleeves. We must continue to come together from a place of fierce love.
Craft for climate. Wear pink and red. Create your own heart and wear it on your sleeve as we march in resistance and solidarity.
Together we march. Join us. Stephanie
“I am 68 years old, now retired after a career as a probation officer, Court Welfare Officer and most recently as an NHS Psychotherapy Manager.
This is the first time I have been charged with any offence and I have not found it easy putting myself in this situation … and appearing in court today on the other side of the fence from my previous professional appearances.
I didn’t want to do this and found it hard knowing that our actions in April were causing disruption and inconvenience to many people’s lives. But I felt impelled to act in the face of the catastrophic future I saw unfolding before us all.
I have long been concerned about climate change, and in the past attended demonstrations, signed petitions and wrote letters to my MP.
But like many people, I only half accepted the magnitude and immediacy of what was facing us, and largely carried on with my life.
So yes, I acknowledge that I broke the law, but we desperately need urgent governmental action around the world to avert disaster, and I hope you will accept that I was true to my own morals in trying to play a small part in making that happen.”
We are receiving amazing human stories and we want to know yours. To read more – or to write your own – join our Facebook group.

Thank you for reading. There’s so much exciting stuff going on in the movement that we barely have time to write this sign-off. Keep up the good work! If you have any questions or queries, please get in touch at [email protected]

Time is running out, so join us in fighting this planetary emergency:

If you’d prefer to assist in other ways, please consider making a donation.